Cities manifest themselves as complex and interactive biological systems in which natural processes seem more and more gripped by artificial, deflective and overexposed forms. Through an exercise of reflection about the merging process, whose visibility may equally trigger grimness and indifference, remapping bodies analyses conditions of plasticity, restraint and tension in the realm of nature.

In the slow process of conquering the outside space, the tree trunk faces difficulties in regaining the territory taken up by the fence. In their biological process, the trees step outside their shape by reconstructing their initial inner structures when contact another body. Here’s when other survival valves reach out. Could we yet create other meanings? Is there the possibility for the denotative power of the outside body to be interpreted as a symbolic gesture that ruptures the hierarchical model conveyed by the arborescent frame? The limitative corpus may act against the vertical structure of things by proposing an elastic horizontal model instead. Thus, the new horizontal territoriality could get to reverse any kind of pre-established hierarchical paradigm.

The recontextualisation of some natural elements in the gallery space and the trees’ recognizable prevalence may trigger a hyper perception of the installation. Whether there is an ecological dimension in reusing forms that are already there or the rhythm created by the slides; the activation of bodies in the gallery stresses the idea of the process: nature as process, memory as process, exhibition as process.

Cristina Vasilescu is an aspiring curator, interested in collaboratively mapping curatorial ideas and philosophies. She holds a BA in Social and Cultural Studies from Goldsmiths University of London and currently does an MA in Curating Contemporary Art at Royal College of Art, London.

Vlad Brăteanu holds a BA in Graphics and currently does an MA in Dynamic Image and Photography at the University of Arts in Bucharest. He works with images, using photography as main medium.

The exhibition can be visited using the following schedule: 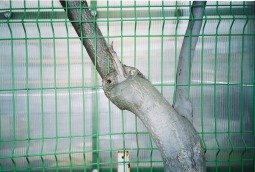