“urban_roma” is a collection of more than 300 family photographs, selected by feminist Crina Marina Morteanu from the personal archives of her family and friends, mostly in Bucharest’s 5th district. The photographs show Roma people from the urban environment, in their familiar setting and through different moments of their lives, throughout a few generations, from the 1950s to the late 1980s. They reveal an unexpected image of families and individuals belonging to the Roma ethnicity, devoid of stereotypes and exoticism, strikingly recognizable as poses, environment or attitude for anyone who has lived through this epoch. A selection of the original photographs is presented in the exhibition at tranzit.ro/ București, while the entire collection can be browsed through, together with accompanying stories and texts on the blog dedicated to the project by Crina Marina Morteanu: urbanroma.wordpress.com.

In dialogue with the black-and-white, fragile photographs we are presenting the most recent series of paintings by George Vasilescu, “Portraits of Roma Women”. George Vasilescu is a young Roma artist who has caught the attention of Bucharest art scene in 2014, when he exhibited at the Museum of Romanian Peasant a series of big portraits of famous manele singers. Contrasting with the iconic pop character of those paintings, the Roma women portraits (created after real models) are humble in scale, vibrant in their presence, each one individualized and at no point becoming generic.

Both Crina Morteanu and George Vasilescu present us with gestures of strong affirmation: of an assumed identity, of a genealogy and not least of an homage to the real urban Roma, who are neighbours, co-citizens, heroes and sometimes friends. 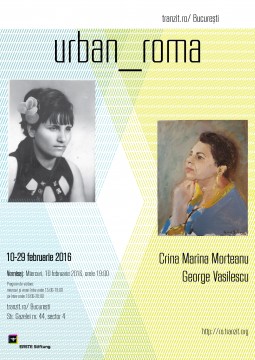