“Repertories of (in)discreetness” has its starting point in the archives of Radio Free Europe from the Open Society Archives in Budapest. It questions the act and mechanisms of archiving “the Other”, with a focus on the European “East”. The project discusses the ways in which information is collected and transferred, the ways in which the East has gained an epistemic body through refraction. Thus we would like to point out the relation between nature of the information, the production of knowledge and its reception.

Radio Free Europe is considered unique in the annals of international broadcasting: acting as surrogate domestic broadcaster for the nations under Communism. It also relied on local official media and informal news in order to broadcast what was considered objective information. Due to their wish to outline an exhaustive portrait of the world behind the Iron Curtain, Radio Free Europe Archives give way to a series of questions. What did the archives not capture and what rests uncatalogued and unverified? And, if something was indeed captured, how was it transformed through archiving? What parts of this composite portrait sketched by Radio Free Europe still survive today? And is this portrait only a mirror image resulting from the media war between East and West? By raising these questions, our project looks to divert and to put into a sensible perspective the act of collecting, organizing and using information, in order to question the nature of the information itself.

The project gathers artists and curators from different corners of the world, active both internationally and locally, and who are defined by mobility and the fact of being, eventually, “between” the two former political blocks. This, of course, feeds into the project a fresh perspective on the old debate about "East" and "West", about the "Other" in general. It is the voice and the concept of a generation that has reached the maturity to look critically both towards the East and the West.

The exhibition is part of the programme "Fiction, Rhetoric and Facts", organized by tranzit.ro in 2012-2015.

General Mood - Irina Botea & Jon Dean
General Mood is a film that embodies a performative archive through exploring the process of categorization and anecdotal information gathering that constitutes much of the Radio Free Europe archive. Filmed on location in Budapest, fragments of original text create a fractured narrative of meta-archival sources that are materialized through the process of following the trail of Radio Free Europe, an institution sponsored by the CIA until 1971. The category of ‘General Mood’ is explored through questioning the structure and content of research methodologies designed to create ‘national pictures’.

Ghost Veil - Istvan Laszlo
Ghost Veil is a project that functions as a time machine. It creates a temporal loop, which becomes visible by activating a carousel slide projector. The starting point is a selection of photographs from The Open Society Archives (OSA) Budapest, all taken in the second half of the 20th century Eastern Europe. The images were digitally manipulated and finally printed back on celluloid. By showing the re-worked old pictures in an analogue way, an authentication is effectuated. Through this technical reversal, the documentation of the past becomes an investigation of the present.
New meanings are conferred by the intervention that hides monuments and public sculptures. Some of these represent socio-political ideologies, some have purely decorative roles. The changes draw attention to the absurdity or necessity of staging and propagating by any means in order to manipulate mass populations. At the same time, the interventions highlight other elements of the original pictures and awaken a curiosity to find and understand what it is missing or hidden. Thus, the project can become an interactive one, and ultimately invites us to search online through the archives in order to learn about the original images and their contexts.

Signal to Noise - Tincuța Heinzel & Lasse Scherffig
Signal to Noise is a radio installation dealing with the concreteness of ideological discourses and the imaginary of the “Other”.
The minimal and non-visual set-up will be composed of two radio stations using the same frequency which intersect and neutralize into a virtual line crossing the space of the exhibition. By broadcasting simultaneously Radio Free Europe and Radio Romania re-worked programs running back then, the two transmissions will interfere and effectively jam each other. It is only when someone carrying mobile radios or receivers will come across the middle line formed by the two transmissions, that he/she will break the neutral point and it will become possible to hear fragments from of one of the two broadcasts. It is like being cached between two Logos (or two ideological positions), where beyond words, the ideological and media wars embody beings.
Far from being historical and contextual dated, the fluidity of radio (or “Hertzian”) space continues to be relevant today, in the age of wireless communication and coded information. Drawing invisible frontiers, building up on coded languages, are arsenals of producing and reiterating the “Other”. 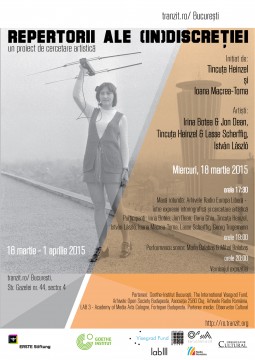