The Last Archive is a project in progress, initiated by Vlad Basalici.

“It's no news that we live in a society of fear that benefits politicians, lobby-advocacy groups and large corporations. Like any other good, in order to sell, fear goes global, shape-shifting from terrorism to bird flus, from pandemics to apocalypse predicted by any culture or religion. Mass media are playing here the role of an emotional agent, like trumpets of revelations, provoking a ceaseless flux of anxiety interrupted only by advertising breaks. These inserts from a perfect world, where all the problems are solved by products, will remind us that while we consume we are safe and, by extension, our universe is saved.
One can say that the end of the world will never come or it always be postponed, as long as we go shopping, in a gesture of continuous redemption.” (Monotremu)

The exhibition is realized by Monotremu in response to the project The Last Archive of Vlad Basalici. The Last Archive consists of a collection of newspapers published on the 21st of December 2012 (the day of the Apocalypse announced by the Maya calendar and one of the most mediatized Apocalypses that never took place), as well as a series of events generated by this collection.

On the 21st of December 2013 there opened the first exhibition based on The Last Archive, The Old, the New and the End, by artist Péter Szabó.

Monotremu:
“We are an artist duo and family. Under the pseudonym of Monotremu we oppose two educational backgrounds - fine arts and sociology, or what sometimes it's seen as "anarchic subjectivism" vs. "totalitarian objectivism". Thus, our collaborative practice is a continuously negotiation based on feelings, intuition and facts that at the end result in works with social and political content. It's a response to the general apathy in the Romanian society traumatized by the neoliberal capitalism and the communist heritage, in the form of critical commentaries and sometimes mockery to the private and public actors that have unlimited powers to give shape to our everyday reality.”

Vlad Basalici is a visual artist and performer who lives and works in Bucharest. In his projects, he investigates how we perceive temporality. His works, as a solo artist or in collaboration, have been presented at brut Vienna, eXplore Festival Bucharest, Alternative Film/Video Festival Belgrade, Dansehallerne, Copenhagen, Alert Studio Bucharest, Paintbrush Factory Cluj-Napoca, Salonul de Proiecte Bucharest or the National Dance Centre Bucharest.

Thanks to: Judit Angel

Redemption Day is part of the programme “Fiction, Rhetoric and Facts”, organized by tranzit.ro in 2012-2015.

The exhibition can be visited between 14-31 January 2015, from Wednesday till Friday from 3-7 pm or by appointment to the email: raluca.voinea@tranzit.org. 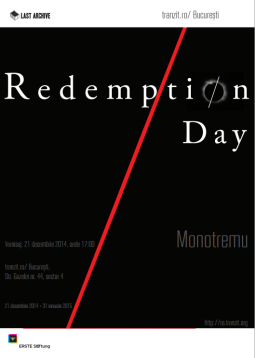