Teodor Graur is a Bucharest-based artist, with a practice spanning more than three decades and an uninterrupted presence on the local scene during all this time. From the evocative observations in the photographs of the 80s, to the humorous objects and performances of the 90s and to the exuberant installations of today, his body of work gives account of a tireless curiosity and is a sometimes reflective sometimes ironic witness to the transformations of the context in which he lives. References to the cultural avant-garde of the 20th century are mixed with a celebration of found materials (organic, artisanal, serial, etc.), the artist crafting them together in repurposed objects that can tell both personal and collective histories, that are both recognizable and unexpected.

The exhibition presents a transversal view through the artistic parcours of Romanian artist Teodor Graur, selecting moments, references, affinities, which compose an installation especially created for the space of tranzit.ro/ București.

The artist’s personal history goes in parallel with that of the city of Bucharest, which we still remember (the reconstruction in the ‘50s and the demolitions of the ‘80s) but also that which we live annually, the history of a city as a perpetual construction-site, simulating and embodying the progress without memory.

In the formal cuts of the exhibition cross each other the artistic avant-garde with the modernism of the ‘70s, the icons of architecture with those of popular culture, design with craft. The 20th century is the background (accepted, claimed, idealized) onto which the artist reads and re-reads his own works, it is the frame in which he places and replaces them, without letting any of the configurations be the definitive one, and it is inexhaustible pool of magic junk and collective souvenirs.
One of the recurring elements – the clock – is however what brings us to the present, to the passing moment, this being also the perspective from which the entire exhibition is realized.

"Teodor Graur: Nostalgia" is part of the programme "/ Bucuresti", a series of events, exhibitions, debates, etc., realized by tranzit.ro/ Bcuuresti. 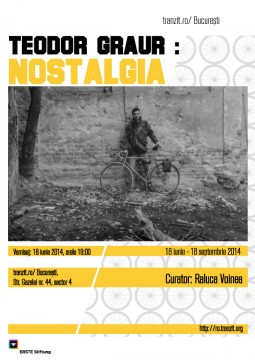