A project by Daniela Palimariu - design by Atelier Brut

Tranzit CAFÉ welcomes you in for three weeks of events created for the rediscovery of permaculture in a personal and social way. Species will be mingled, crossings between territories will be sought after, potentially harmful contacts will be identified. In close relation to the community garden outside (Tranzit Garden), the CAFÉ is designed to be a meeting spot, a working desk, a place for understated scenarios and a basic, yet open-to-all kitchen. Visitors should not avoid bringing in their skills, ideas or surplus of produce to share.

The CAFÉ was first opened in 2012 under the name CAFE35 (at Atelier35, with support from Alice Gancevici) and it was an inconspicuous alternative to the aggressive gentrification in the surrounding area. Parts of the initial furniture – also designed by Atelier Brut – will be now put in use for a second time.

On the duration of the TranzitCAFÉ you are invited for three thematic evenings, within which you can test different roles that maybe you haven’t yet had the occasion to try. Keeping in mind the close relationship with the Tranzit Garden, these events are the meetings which purpose is to be discovered gradually and which, sometimes, artistic spaces have the chance to host.

Mint is an attention-seeking, invasive plant.
Saturday, April 12, from 3 to 6 pm.
For this event we ask you to bring an ingredient which can be used for a salad.

Tomatoes and potatoes have the will and the abilities to sabotage each other{/}.
Friday, April 25, from 3 to 6 pm.
For this event we ask you to bring an ingredient which can be cooked outside.

The Flower Ball (or Petunia is a trap)
Wednesday, April 30, from 7 pm.
This will also be the closing event of TranzitCAFÉ.

Besides these events, you can spend time in the café, using it as a space for working, for meetings or relaxation. Every week, a selection of 10 books from the library will be available for reading in the space of the café. We offer tea, coffee, internet access and observation cards which you can fill in for a detailed understanding of the space in TranzitCAFÉ and around.

Daniela Pălimariu (b. 1986, Iasi) currently lives in Bucharest, Romania. In the last few years, her art practice has evolved towards social events that shift between private and public spheres; alongside, she creates livable objects that understate the ambiguity of human relations, the need for personal space and the taste for daily subversions. Since 2012 she coordinates SALON VIDEO, a platform for promoting and experimenting with video art.
danielapalimariu.ro

Atelier Brut is the design project of stage designer Andrei Dinu, established in 2010. The Atelier creates furniture made of recycled materials and exhibition designs. Atelier Brut realized the library for the space of tranzit.ro/ Bucureşti as well as the design for some of the exhibitions which took place here. http://atelierbrut.ro/
We would like to thank to Dan Basu, Vlad Basalici, Eduard Constantin and Simion Constantin. 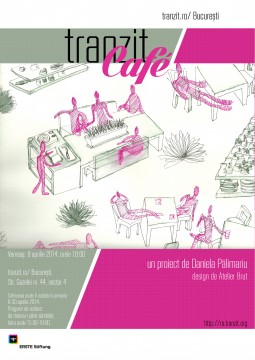