The exhibition is open in all three spaces from Monday to Friday between 12pm - 7pm, or any time outside this timeframe through a phone scheduling at +40 746 849 703.

A working method anticipates results. A reading method reconstructs imagination. In the process of reconfiguring everyday actions any analytical endeavor unravels applications of a personal methodology, in which the working method and the reading method open the space for a certain understanding of the world. By proposing a path of display throughout multiple locations in Iași, the fourth edition of SALON VIDEO brings into focus a selection of works that questions, in an analytical, jovial and systematic manner, certain matters of method. Although not the geographical diversity is what distributes the content of the exhibition, MATTERS OF METHOD attempts to reorder a universal artistic discourse in the context of the city of Iași, by connecting the aesthetics of international contemporary art practices with the common space of video language.

Invoking the institutional diversity of three different exhibition spaces, the exhibition coagulates three levels of approaching the concept of method both as a visual, almost cinematographic subject, as it reveals itself among many of the selected works, and as a surprise model for interpersonal research.

An analytical perspective upon the world opens with the tranzit.ro/ Iași space as an invitation towards some general notions of method: the power that the individual exerts upon the world, upon technology, history, countries, objects or other people, but also the de-hierarchizations which a football supporter, a rickshaw driver or a state president are recomposing as utopias of some re-established power relations.

Following a close-up discovery of the contemporary individual as a mechanical organism with systematic survival abilities, the individual action methodology aimed at the self institutes a format for documenting intervention: the invention of rules, the creation of gestures, the act upon the object and community, the act against the object and community, the personal experimentation of language and of social traps, or the discovery of silence are reference points for the selection that is displayed in the space of Royal Foundation Galleries inside BCU building in Iași.

In a structural plan, if the city and community policies are shaping the map for a conflictive behavior between those who establish rules and those who (re)learn them, generally, processes like urban gentrification or the colonization of the self are not strictly tight to the administration of a conquering vision; the action of giving in, of dropping out territoriality and of unsolicited immersion into new behavior sets are more appealing and define an aesthetic area for the politicized space and artistic product. The works displayed in Meru gallery open the access towards such an understanding of the exhibition.

By crossing this systematic route in which visions about the world gain an educational valence from a global level to an intimate one and then to a political one, the MATTERS OF METHOD exhibition proposes, through the dynamics of the three spaces and through the heterogenous cultural personality of the exhibited artists, a call for reconfirming the visual power of contemporary video language.


SALON VIDEO is a platform for showing and experimenting with video art, initiated by Daniela Palimariu and Dan Basu in 2012 in Bucharest. The selection of artists for the fourth edition - MATTERS OF METHOD has followed an international open call through which we received 130 video and sound works proposals from Romania, Europe, Japan, China, United States, Canada, Brazil and Australia. SALON VIDEO would like to thank Alert Studio, Atelier 35 and Platforma Space for their collaboration during the first 3 editions in 2012. 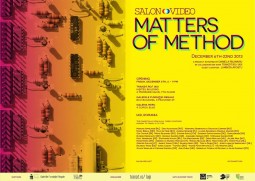