In his work Daniel Knorr produce a spool of wire that covers entirely the column situated in the center of the tranzit.ro/Cluj space. At the opening of the show, the artist starts to unroll the spool passing it to friends, supporters and interested viewers. The work relates to the practice of Krasinski and minimalists like Manzoni and Andre, allowing the materialization of a dynamic group expression. After the opening, the viewers can still change the form and position of the wire. The work materializes further the experience of material in haptic and expansive dynamic way, enabling the perception of common consumption and expression in cultural space.

Daniel Knorr was born in Bucharest in 1968 and lives in Berlin. His works includes "European Influenza" in Romanian Pavilion at Venice Biennial (2005), "Nationalgalerie" in Berlin Biennial (2008), "Led R Nanirok" in a personal exhibition at Kunsthalle Basel (2009), " Natural Cultural" in Färgfabriken (2011), and "Smoking in the Museum" at the Kunsthalle Bremen (2012), for which he was awarded Böttcherstraße prize. Currently Knorr is preparing a new exhibition with a series of works called 'Elevations Depression", a project for Kayne Griffin Corcoran Gallery in Los Angeles.

Instant Community is part of the programme „Fiction, rhetoric and facts”, developed by tranzit.ro in 2012-2013.

Opening hours: from Tuesday to Friday, from 3 to 6 pm. 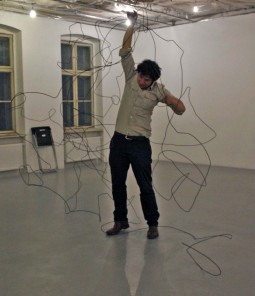