“Nowadays we inhabit the crisis; it saturates the entire social tissue, channeling all life functions into its groove, so that it seems impossible to look beyond it. The political-cultural effects are being erected before our eyes. The title of the exhibition can be understood as a reflection on a situation – way too familiar in Hungary – whereby every single idea, be it an everyday speech act or a refined art concept, becomes instrumentalised within a binary field of values and interests, in the moment of their inception, often even before. The exhibition, contrary to earlier text-based and referential works, is rather mute. It is composed of a jigsaw puzzle of loosely interconnected, bitterly ironic gestures; of thoughts that are not willing either to resolve, or to short-circuit themselves. Bob Marley does not make it past the intro.” E.M.

Instrumental is part of the Fiction, Rhetoric and Facts program developed by tranzit.ro.

Miklós Erhardt (1966). His work – interventions in public space, photo, video, mixed media installations – has been evolving within the overlaps of the social/political/artistic fields. Between 1998 and 2006 was working in the Big Hope project group with Scottish artist Dominic Hislop; Big Hope did a series of participation-based social documentary projects and was widely exhibiting in Europe and beyond. Among various literature, has translated books by Noam Chomsky and Guy Debord into Hungarian. Teaches media design at the Moholy-Nagy Univeristy of Art and Design in Budapest. Lives and works in Budapest and Vienna. 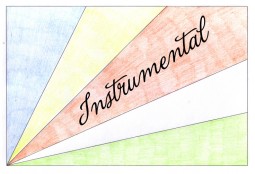