tranzit.ro/ Bucuresti - Km. 0. Representations and repetitions of the University Square

tranzit.ro/ Bucureşti invites you on Friday, 30 November 2012 from 19:00h at the opening of the exhibition “Km. 0. Representations and repetitions of the University Square”. The exhibition presents different reflections upon the University Square in Bucharest, seen as a “ground zero” of public space in Romania after 1989. While the unresolved conflicts of 1990, which had turned the Square into a memorial place seemed to vanish from public consciousness, in the beginning of 2012 people gathered there again to voice their discontent and – even if apparently only for a short time – they have regained the Square as a place of free expression and manifestation of civic attitude. With a future still unclear, with the perspective of being turned into a regulated, controlled and surveilled “menagerie”, the University Square remains still a place with an important symbolic significance, especially in the current political context, in Romania but not only.

Approaching the issue of the University Square in an exhibition is not so much a step back from the site of action as it is an opportunity to present a multiplicity of perspectives through which the artistic gesture can offer less polarising and more complex patterns of interpretation and remembering of the Square. Thus, this can be seen not only as the “kilometre zero of democracy” or a “ground zero” from which social protests can emerge, but also as a space in which to imagine new relations between individuals and the social body or between citizens and the state that represents them.

“Km. 0. Representations and repetitions of the University Square” presents works realized as reflections upon the Square, documentations of performances already realized in the Square or new works, especially realized for the exhibition. During the opening, from 19:30h to 20:30h, as part of her installation “Nothing lasts but doesn’t pass either”, Alexandra Pirici will realize a performance together with Bogdan Drăgănescu, Mădălina Dan, Jean Lorin Sterian, Vlad Basalici.

The exhibition can be visited during December 2012 by appointment, writing to: raluca.voinea@tranzit.org and between 8th of January and 28th of February 2013 it will be opened for the public from Thursday to Saturday, 14:00h-18:00h.
A series of debates, conferences and other events will accompany the exhibition throughout its duration.
Curator: Raluca Voinea

Press information: office.ro@tranzit.org
tranzit.ro was founded in 2012 at the initiative of ERSTE Foundation, thus becoming the fifth member of tranzit.org, a network of independent, non-profit organisations from Austria, the Czech Republic, Hungary and the Slovak Republic.
http://www.tranzit.org
tranzit.ro has the particularity of being itself a network activating in three permanent spaces in the cities of Iasi, Cluj and Bucharest. Through a wide range of activitites, experimenting with different working and collaboration methodologies, tranzit.ro wishes to establish itself as an innovative platform dedicated to contemporary art.
http://ro.tranzit.org 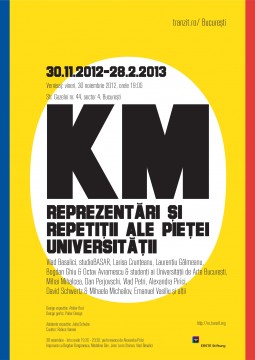